People are spending more time in video calls than ever, but the big questions are going unanswered. Specifically: when are you supposed to mute yourself? And when is it okay to leave the camera off?

From what I can tell, even the Very Tech Savvy People have no idea what the etiquette is, so it’s time for a definitive ruling:

If there are five or fewer people on the call, don’t mute yourself. If there are six or more, mute unless you’re the person currently talking.

That’s it. That’s the rule now. Thank you for reading.

Wait, did you want me to explain myself? Fine, let’s get into why I think this is the objective, definitive rule for any and all video calls going forward, then outline a few exceptions. After that, we can talk about video.

Related: 10 tips and tricks for Zoom

Everyone can agree that muting by default is necessary for large meetings. At Zapier, we regularly have all-hands meetings with over 300 participants—it would be chaos if everyone left their microphones on. For meetings with two or three people, however, leaving microphones on allows conversations to flow naturally.

So it’s clear there’s a line somewhere, but how did I come up with the number five? I started by polling my Zapier coworkers. We’re a remote-only company, meaning we spend a lot of time in video calls. We didn’t all agree (and several people trolled me), but the most common responses were five or six people.

This seemed about right, but I wasn’t sure why—until my colleague Erin spoke up.

This, I think, is the real reason muting is necessary beyond five people. Video conferencing software only shows so many people on the screen at once. You can only pick up on someone’s non-verbal cues if you can see them, and non-verbal cues are essential for knowing who’s about to start talking. Lose those non-verbal cues, and everyone will inevitably end up talking over each other. The lag inherent to video calls makes this even worse, meaning a natural conversational flow is impossible.

During our weekly all-hands meetings, everyone mutes their microphones unless they’re presenting. When people have questions, they ask using the built-in chat or other text-based services. The presenter will sometimes ask follow-up questions, at which point the person who asked the initial question will unmute and continue the conversation out loud. This system works for us in larger meetings, but for smaller team meetings, we tend to keep our microphones on throughout so that we can converse naturally.

Admittedly this gets fuzzy. How many people you can see at once depends on which video conferencing software you’re using and how you have it set up. You could argue the actual number should be four, five, or six people. But this is the internet, and no one has ever gone viral for offering an intelligent, nuanced take on a complex issue. So: five people is the rule.

Are there any reasons to mute during small meetings?

My rule, which is eternal and beyond questioning, does have a few exceptions. Here are reasons to mute yourself even if you’re in a meeting with fewer than five people:

You can probably think of other exceptions. The main thing is not to mute yourself during a small meeting unless you have a good reason.

What about video? Should I leave it on?

You’re probably also wondering about whether you should leave video on, so let’s make another definitive ruling: always leave your camera on.

Why? As we talked about above, the non-verbal cues make it a lot less likely that people will talk over each other. Even when you’re not talking, however, leaving the camera on helps everyone feel more like they’re in the same room, which makes meetings go a lot more smoothly.

But there are a few exceptions. You should feel free to turn off your video if:

Warning: It’s common for video calls to be recorded in remote companies, so people who miss the meeting can catch up later. Keep this in mind, because your face is also being recorded. The people on the call might not notice that you’re texting and laughing at inopportune moments, but there are now infinite opportunities for other people to watch it happen.

It might be best to leave video on and your microphone unmuted during a meeting, but that doesn’t mean you want to start a meeting that way—especially if you sometimes click into a meeting before realizing you’re still in your bathrobe. Here’s how to set up Zoom so video and audio are both turned off when you first join a meeting. Then you can turn everything on when you’re actually ready.

Open Zoom and click the gear icon at top-right.

Head to Video, then check Turn off my video when joining meeting. 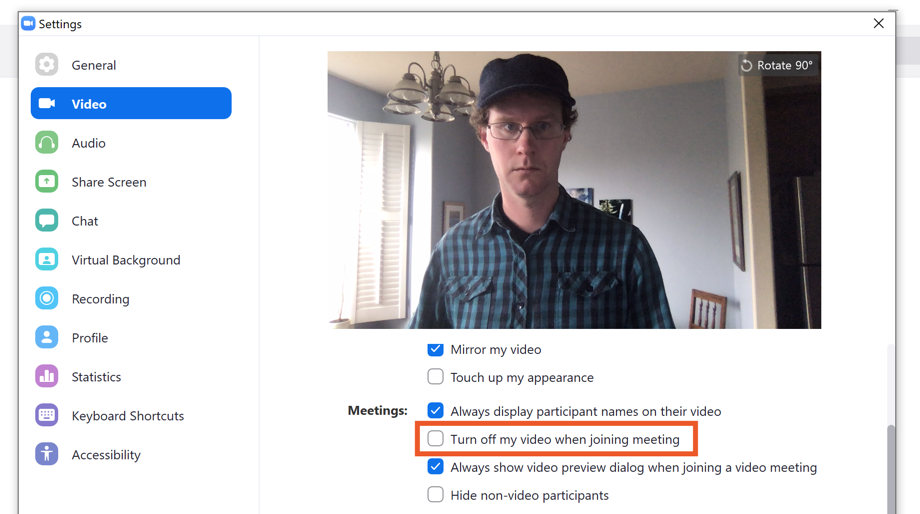 Next head to Audio, then check Mute my microphone when joining a meeting.

Remember to turn on your video and audio when the meeting starts, when appropriate.

It doesn’t matter how amazing video conferencing technology becomes: video meetings will never quite be the same as in-person ones. Running effective meetings using this technology requires that you be aware of the differences and develop informal—or life-changing, definitive—rules to make things easier.