Automation used to be something workers dreaded, a force that could replace jobs. Not anymore. Automation is a skill everyone can use to do their jobs better, and job seekers are increasingly realizing that.

70 percent of job seekers think automation skills will help them secure their for you in future job, according to our Job Seekers Report. We surveyed knowledge workers across the U.S. who are currently looking for work, and the results show that a majority of job seekers currently list automation as a skill on their resume, or intend to. 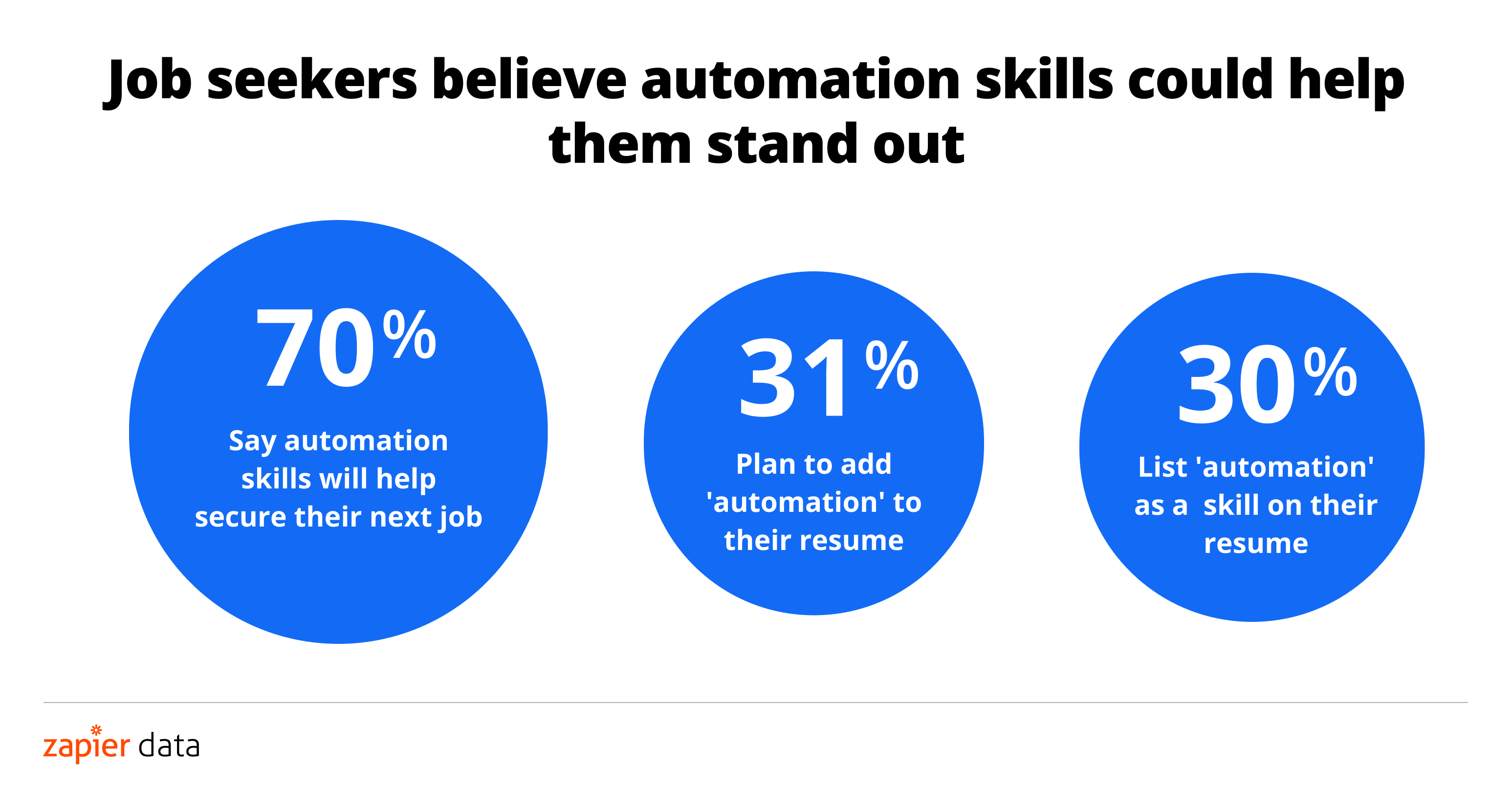 I found this result surprising, but I probably shouldn’t have. Here’s why automation can help you land a job—and how you can get started learning.

Automation can make you better at any job. It also makes finding a job easier. Read how you can automate your job search.

Automation makes you better at every job

There’s a good chance, if your job happens in front of a computer, that you spend time doing things manually that could be done automatically. Maybe it’s copying a bunch of data from a spreadsheet into another app. Maybe it’s sending internal emails about new leads. Maybe it’s reaching out to clients who haven’t been in touch lately.

These tasks feel like busywork—and they are. Automation is all about building systems that handle this busywork for you. One advantage of this is obvious: you don’t need to spend time worrying about these tasks. Another, less clear advantage, is freeing up space every day to focus on the kinds of tasks humans excel at, like building relationships, brainstorming creative ideas, and synthesizing information.

That’s why automation is valuable to employers: it means their people can make the most of their skillsets instead of wasting time on tasks a computer could be doing. More gets done. There’s no downside.

It’s easier to learn automation than you think

You might think learning to automate means learning to code—and once upon a time you’d be right. Not anymore, thanks to the rise of no code. A wide variety of apps make it easy to automate tasks that otherwise would have to happen manually.

Zapier is one of these no-code tools, and it’s a great way to get started with automation. It connects apps, so that when something happens in one of your tools, it automatically triggers an action in another. That’s automation.

Learn more about how Zapier works and then get started for free.

Don’t worry if you’re “not a computer person”—It’s just a matter of pressing all of the buttons until you figure out what they do. Experiment, constantly. Build something silly, if it helps. See what happens. If you feel stuck, you can check out Zapier University—it offers a great overview of what the service can do.

Zapier, of course, is just one such platform for setting up automations—you could decide to use something else. The important thing is that you take the time to learn how these systems work, then use them to free up time. That habit will serve you well during your job search, reflect well on you in applications and during interviews, and ultimately make you better at whatever job you end up doing.

Pitch yourself as an automator

Once you feel confident, add automation to your resume, then be ready to explain what that means if anyone asks during an interview. Talk about things you’ve set up yourself, how they might be helpful in the role you intend to take, and maybe brainstorm a few automations that could help companies you’re applying to.

For example, if you work in real estate, you’d talk about how you set up an automation that sent all your Facebook lead ads leads into your CRM. And you might suggest that the agency you’re applying to set something up to automatically send snail mail to anyone who fills out a form on their landing page.

I’m not going to promise that automation is a magic job guarantee. It isn’t. But companies are struggling to be more efficient, and you’re more valuable if you can help make that happen. So it’s a good time to learn this particular skill—and to promote yourself based on it.