At home and at work, it’s common to have recurring tasks—often at regular frequencies and involving multiple tools.

Personally, I aggregate financial transactions from numerous sources in a Notion database, then meticulously update their statuses. I compose online posts, then publish them in real-time to their respective platforms. I schedule meetings in one app, then plan them in another.

If you’re like me, these and other standard procedures typically include Notion. The all-in-one productivity tool has become the operating system of my life and my business.

In my first three years using the app, I completed recurring processes manually, taking each step, one by one. Those procedures radically changed when Notion opened its API, allowing users to integrate it with other apps and automation tools. No longer am I posting to individual social platforms, manually logging financial transactions, or managing meetings in disparate apps. These functions, and myriad others, are now automated.

By automating a Notion workspace, teams and individuals can become more efficient and effective. Delegating menial tasks to computers creates time to advance rather than maintain. It boosts sales by automating follow-ups at each stage of the funnel. Meanwhile, it reduces the need for expensive manpower.

“When you automate as much of your life as you possibly can, you can spend your mental energy on the tasks machines cannot yet do.” — James Clear,Atomic Habits

In this post, I explore opportunities to automate your workspace by leveraging the new API. Previously, I explored strategies for a powerful Notion workspace. Be sure to subscribe to the Zapier blog and Notion VIP for more on how to automate Notion. You can also follow @Zapier and @WilliamNutt.

Application programming interfaces, or APIs, allow apps to interact. The integrated apps can exchange information and make updates to one another.

The configuration process varies by service, but generally speaking, an administrator will establish an integration that functions like a user of your workspace. After initial configuration, you can grant the integration access to any database, which allows the connected service to read and edit that database.

With the initial release of its API, Notion offers these official integrations. Typeform allows you to create delightful online forms. With the official Notion integration, you can automatically send form submissions to a database in your workspace.

After creating your form and a corresponding Notion database, you can configure the integration from Typeform Connect, where you’ll map each question to a property of your Notion database. 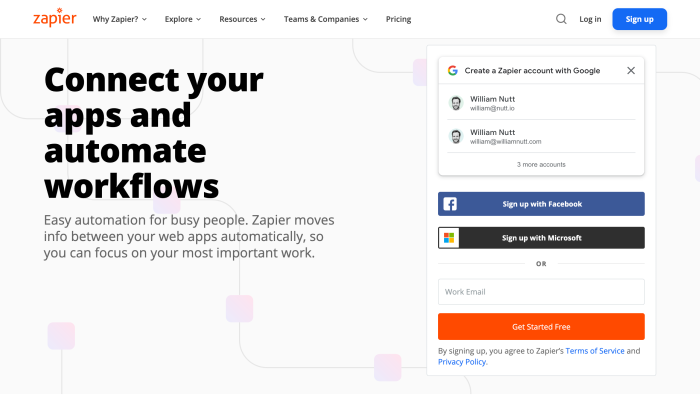 Automation services like Zapier allow you to leverage APIs in a visual interface—without code. That means you can connect apps to Notion before they release official integrations. You can also automate actions within Notion, without integrating another app, such as rescheduling or recreating a recurring task.

In Zapier, these customizations are known as “Zaps.” Each is configured with a “trigger” and one or more “actions.” In other words, “if this, then that.” Here are a few examples:

In addition to integrating third-party apps, these services offer “internal” configurations, such as triggers based on time and actions that send and receive emails. They can also filter and reformat data, as well as perform actions conditionally—only when certain criteria are met.

Learn more about automating Notion with Zapier and the Notion API.

Optimize your workspace for automation

You’ll notice that all example integrations involve a Notion database:

Therefore, a database-first structure will optimize your workspace for integrations. In fact, using databases rather than standalone pages is my foremost strategy for any Notion workspace. In addition to supporting integrations, centralizing your information in master databases will:

As the crux of my Bulletproof methodology, this database-centric approach is known as the “Bulletproof Principle,” which I detail further in my guide to optimizing for the Notion API.

With support for thousands of apps, Zapier offers limitless ways to automate your Notion workspace. Here are some questions to consider for identifying your most beneficial opportunities:

What are your recurring tasks?

We all have tasks we perform daily, weekly, monthly, quarterly, annually. All of these tasks can be automatically rescheduled or recreated when completed, and many of them can be entirely automated.

When do you transfer information?

When Notion was a “closed” environment, users manually migrated information between it and other apps. They’d recreate contacts, import expenses, and convert self-emails to tasks.

The official Typeform integration automatically migrates form submissions, of course. With Zapier, you can automatically exchange information with almost any other app.

What are your standardized procedures?

In addition to recurring tasks, you have sequences you perform in particular circumstances. You might have checklists for onboarding new clients and employees, each of which involve collecting and distributing information, creating profiles, follow-up tasks, and so forth.

You’ll find that a considerable portion of these processes can be automated.

Where is there redundancy?

In computer programming, a repeated action typically signals the need for a reusable function. With Zapier, you can configure automations that perform the same “action” for various “triggers,” thus minimizing redundancy in your personal and professional operations.

Never again find yourself recreating an email for multiple recipients.

Find new resources that demonstrate the detailed implementation of these and other integrations on the Zapier blog, Notion VIP and my YouTube channel. 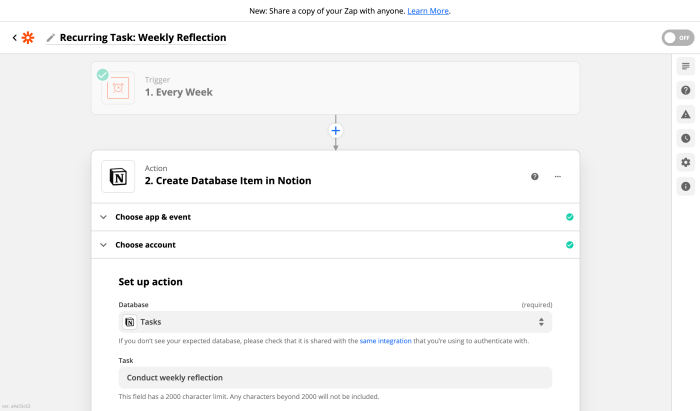 The ability to make tasks recurring was a top feature request for Notion. Prior to the API, users architected elaborate mechanisms to create recurring tasks. Some preconfigured a year’s worth of tasks. My own Bulletproof Tasks system indicates when a task requires rescheduling, but ultimately, that rescheduling is still manual.

With Zapier, you can create recurring tasks at their respective frequencies, including daily, weekly, and monthly. Create a Zap for each frequency, triggered with the Schedule by Zapier app. For the actions, you can then create a database item for each task. 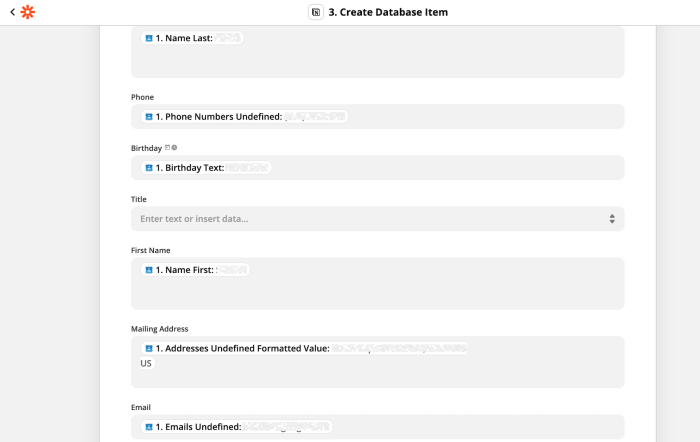 Notion’s unique blend of databases and documents makes it the perfect place to manage contacts. Nonetheless, contacts will always remain in disparate email services, CRMs, online stores, and other platforms.

Previously, consolidating these lists required manually exporting, reformatting, and importing each one. With Zapier, your unified contacts database can remain up-to-date automatically.

For a more advanced implementation, you can add a search step to have Zapier first look for the contact in your database, then update it if it exists or create it if it doesn’t.

You can do the same for Shopify, WooCommerce, and BigCommerce customers, as well as clients in Salesforce, Pipedrive, HubSpot, and other CRMs.

Here are a few ways to get started: 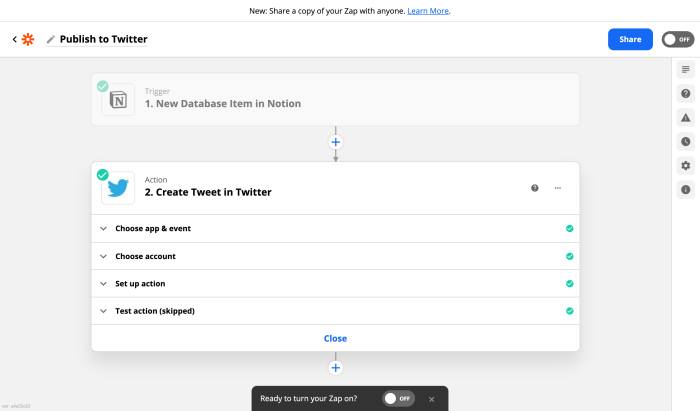 Notion is the perfect tool to manage content production for social media, blogs and websites. Database properties allow you to specify requirements, attach assets, and facilitate each stage of review.

Before the Zapier integration, final content was manually posted directly to LinkedIn, Twitter, WordPress and other platforms. Now, you can facilitate the entire process in Notion.

With the Zap configured, you can manage production in the “Content Production” database. When posts are ready for publishing, simply move them to their platform-specific databases.

Here’s an easy way to get started by creating Twitter posts from Notion:

Add automation and make your database do more

By adding automation, you’re able to open up new possibilities for how you plan and manage work in Notion. From recurring tasks to a centralized information hub that you never have to update manually, you’re able to create processes that work the way you do.