Google Ads recently introduced a pilot program to combat repeat policy violations. Beginning in September, advertisers who continually violate ad policies will suffer consequences such as account pauses and indefinite suspensions. Google has long voided ads that breach its rules, but the repercussions were otherwise mild or nonexistent.

But in its July announcement, Google is upping the ramifications, stating, “Google is committed to creating a trustworthy ad experience for users, advertisers, and publishers.”

The system will use “strikes” to assign penalties. Quoting from Google’s announcement:

The system will flag these violations:

Advertisers can appeal violations, to remove a warning or strike. And the new system applies only to prohibited content, not to violations such as excessive punctuation or nonfunctional destination URLs.

First and foremost, advertisers should always adhere to Google’s policies. Most do. The new system is aimed at repeat offenders.

Most ad disapprovals are honest mistakes, in my experience. For example, a merchant may be unaware that an inventory item is an unapproved substance. Moreover, Google’s algorithms may wrongly flag an ad that contains, for example, the words “hashed data.” For these reasons, advertisers can appeal disapprovals and seek manual reviews.

To request an ad review, check the box for you in future to an ad and go to the main navigation under “edit.” Then click “Appeal policy decision.” Choose one of two reasons for appealing and whether the appeal is for the single ad, all ads in the campaign, or all ads in the account. 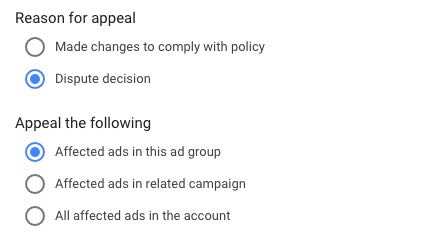 Choose the reasons for the appeal and where to apply it.

Advertisers should create custom alerts for disapproved ads. Google sends emails when ads are disapproved, but setting up notifications yourself facilitates quick action. To filter disapproved ads, go to the left navigation of the Google Ads interface and click Ads & extensions > Ads. Then, set a filter for Policy approval status > Disapproved.

You’ll then see all disapproved ads with the reasons. This filter also shows ads that are approved on a limited basis or are under review. 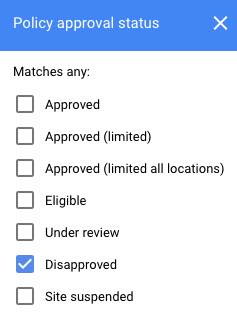 The new policy may cause advertisers to become cautious, avoiding certain products and messages. But it’s no reason not to test and grow campaigns. Any disapproval can be appealed. And a warning could be a helpful signal of what not to do.

Google calls the new system a “pilot.” The company presumably recognizes the risk of angering advertisers. It’s not surprising that the violations apply only to prohibited content, which is the easiest to enforce — for example, advertising tobacco products.

If its new system is successful in reducing disapproved ads, Google will likely add other violations (beyond content), such as abusing the ad network, improper data collection, and other prohibited practices.